The Forest Lodge Library – where the Future resides in the Past

The Forest Lodge Library was founded in 1925 by Mary Livingston Griggs in memory of her mother, Mary Steele Livingston. First called The Community House, Mrs. Griggs envisioned and executed a downtown Cable facility that would combine the functions of library, community meeting center and public rest room. The building was constructed of logs cut and milled of the Griggs’ property, the Forest Lodge Estate, on nearby Lake Namakagon.

Later named the Forest Lodge Library, the building is one of two log cabin libraries in the State of Wisconsin. While not the oldest building, it has been a library the longest. The building was named to the State Register of Historic Places in 2000.

When the Cable Natural History Museum was established in 1968 the library and the Museum merged and operated under a single board funded by the Mary Livingston Griggs and Mary Griggs Burke Foundation. In 1992, the library established its own Board of Trustees and became a fully functioning public library. In January of 2007 the Forest Lodge Library became a Joint Library of the Towns of Cable and Namakagon.

In December of 2016 the Library Board effected the purchase of property adjacent to the Forest Lodge Library with plans to, eventually, create a library addition to augment the programs, services and collections available to its patrons. The property is jointly owned by the Towns of Cable and Namakagon. Read more about our “building project” under the New Building Project tab.

The Forest Lodge Library has long had a good reputation for friendly, welcoming and efficient service. If you are not already a patron…we hope that you will soon come in and check out all the services your library has to offer.

There are no upcoming events at this time.

This Pandemic Summer 2020 we are open:

Seniors and at-risk individuals wishing to visit during non-open hours may make an appointment to do so by calling us at 715-798-3189 or emailing cablelibrary@cable.wislib.org

Sign up to be first to know about all things Forest Lodge Library!

Whether through donations of time, money, or materials, your support is what makes our library GREAT! 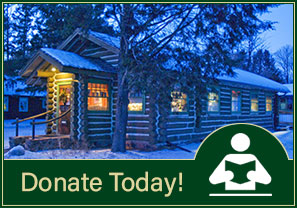