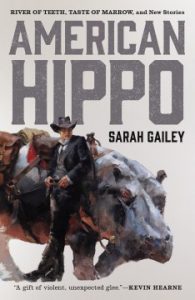 I occasionally indulge in what I refer to as “snack food reading”…pure entertainment, pure fun. Now, snacks can be things like Cheetos or Twinkies…or they can be more like a slice of fine Wisconsin cheese on a quality cracker. The latter is preferred! (not that I’m above eating a bag of Cheetos now and again!) I place AMERICAN HIPPO by Sarah Gailey squarely in the category of high quality snack food reading.

It is…hmmmm…we’ll call it an imaginary Western. Although, it takes place in the south and Mississippi River regions and, instead of horses, there are hippos! Yes, that’s right, hippopotami. This tale posits that in the late 1850s hippos are imported into the United States to be raised as a meat source. Sections of the Mississippi are dammed to create marshes where these “river pigs” can be ranched. “Hoppers” are the hippo-related version of cowboys. A hippo ranch accident results in a goodly number of them escaping their enclosure. They eventually produce a feral hippo population that has to be contained in a section of the River now called The Harriet because hippos, as you maybe know, are very dangerous animals.

Winslow Remington Houndstooth, early in the 1900s, receives a contract from the Federal Government to clear the feral hippos out of the Harriet. They think he’ll be removing them one by one over a year’s time. Houndstooth has other ideas. He puts together a team of, well, scoundrels and thieves, to enact his own plan. To tell you much more than that would be to ruin all the fun, save to assure you that madness and mayhem ensue. I will also say that you might find the characters to be…gender fluid. Certainly gender ROLE fluid!

If you have the capacity to suspend belief and enjoy something a bit off the beaten path, I feel pretty confident in saying that you will love AMERICAN HIPPO. It is really two novellas: RIVER OF TEETH and TASTE OF MARROW along with a couple of short stories that serve as prequels to the action. To quote author Kevin Hearne who provided a blurb, this title is “A gift of violent, unexpected glee.”