The Plot to Destroy Democracy: How Putin and His Spies Are Undermining America and Dismantling the West by Malcolm Nance 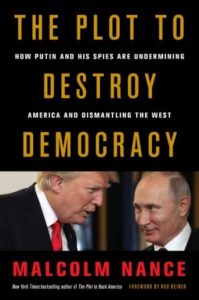 I would like to suggest that this is a must-read for anyone who cares about this country and has an interest in both preserving our Constitution and understanding that the divisiveness that afflicts us is not all entirely a natural occurrence.

Malcolm Nancy is retired Navy, from a 20 year career where he was specialized in naval cryptology. His knowledge of the history and current status of intelligence and counter-intelligence, here and abroad, is formidable, and the reason why he is sought out as a media commentator on terrorism, intelligence, insurgency and torture. In THE PLOT TO DESTROY DEMOCRACY: HOW PUTIN AND HIS SPIES ARE UNDERMINING AMERICA AND DISMANTLING THE WEST Nance provides tons of history and context for what it is, exactly, that Putin and the Russian State have endeavored to accomplish here and, in fact, world-wide. He provides us with a history of Russian intelligence services and the Active Measures they use to accomplish their ends, a review of Putin’s own career and world view and I, for one, was left thinking that this has to be the most successful Active Measure ever in the history of spycraft!

Because I follow the news, the actual news, conducted by actual journalists with actual journalistic ethics (which, by the by, have nothing to do with political affiliation) some of what I read was not news to me. I was familiar with the social media campaign which furthered national divisions on a variety of social issues. I knew about the use of bots and the dozens of ersatz Twitter and Facebook “identities” that sought to spread disinformation, thereby widening the gulf between our citizenry. I knew that these activities were still ongoing. What I did NOT know was how long they had been going on.

Perhaps most chilling was learning about the years long courting of the American Right through overtures, and actual funding for, the NRA and Christian Evangelicals. According to Nance, who does provide facts, figures, names and dates and not just innuendo, these groups now consider themselves to be more closely aligned with the current Russian State and its policies than those of “liberal” America. I just did not get how Christian Evangelicals could be so pro-Trump and overlook all of his clear moral failings. Now I know.

OK, I take that back. Most chilling was the chapter on the American alt-right and its world-wide counterparts, particularly in Europe.

That the Russian State worked to interfere with the 2016 election cycle has been corroborated by all U S Intelligence services. Whether or not this had an effect on the outcome of the election or whether or not the Trump campaign colluded in this effort remains unknown and may never be known. The important point I wish to make is that we, no matter what our political bent may be, should not just know THAT it happened, but how and we should all take steps to prevent it from happening again and to, at least, prevent the ongoing disinformation campaign from affecting our own thinking…and voting record. To quote Mr. Nance, a self-identified Republican, “We are the cavalry we have been waiting for. Now stop reading. Go forth. Save democracy.”

You & a Bike & a Road by Eleanor Davis 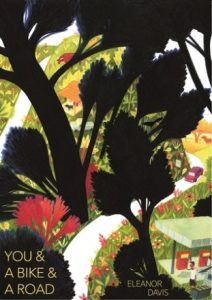 Eleanor Davis kept a sketchbook diary during a cross-country bicycle trip. Her drawings led to this deceptively simple graphic novel that looks at aging, depression, immigration, and much more. The art in this book are simple, the ideas are not.

You & A Bike & A Road is a raw look at the beauty of our American landscape told with wry humor and vulnerability. There are times when only a graphic novel will do, especially when they are as inspiring and insightful as this one.

“I like going further than we tell ourselves is possible.”

The Lost for Words Bookshop by Stephanie Butland 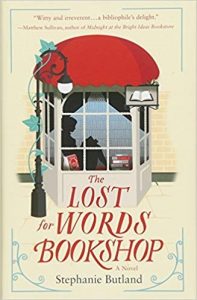 Loveday Cardew prefers books to people. If you look carefully, you might glimpse the first lines of the novels she loves most tattooed on her skin. But there are some things Loveday will never, ever show you.

Into her hiding place – the bookstore where she works – come a poet, a lover, and three suspicious deliveries.

Someone has found out about her mysterious past. Will Loveday survive her own heartbreaking secrets?”

A very sweet, quick read, perfect for the last days of summer.