REFERENDUMS on the November Ballot 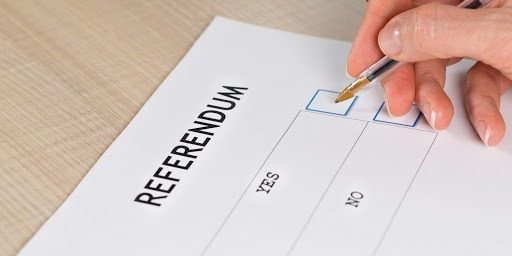 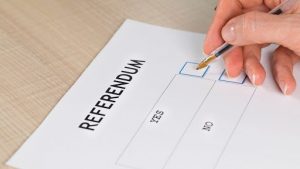 Don’t you just hate it when you look at your ballot…and find a couple of referendums that you didn’t know were going to be there…and don’t know quite what to think? Here’s some advance notice of three referendums that will be on the November ballot. Two deal with local issues. The other will appear on ballots in 11 Counties and the City of Racine. All are advisory referendums.

County: Will appear on both Cable and Namakagon ballots.

Question: Should the Wisconsin legislature create a nonpartisan procedure for the preparation of legislative and congressional district plans and maps?

Cable: Vote YES or NO on each question.

Referendum Question #1- “Shall the persons holding the administrative offices of Town Clerk and Town Treasurer in the Town of Cable be appointed by the Town Board based on qualifications after an established procedure and subject to review procedures rather than elected on a ballot?”

Both the Clerk and Treasurer are administrative officers, not policy making. They cannot vote.  These positions require skills in municipal government, administration and finance and, if this referendum is approved, the Town Board would establish a hiring process involving job postings, interviews and review of qualifications.  Appointment through the hiring process would not restrict job applicants to Town residents, which would broaden the pool of qualified applicants.  These officers would also be subject to performance standards and could be subject to removal for cause.

Referendum Question 2: “Shall the Town Board be expanded to five members commencing with the 2021 Spring Election as established in Ordinance 45-234 that was conditionally approved by the Town Board?”

At the 2019 Annual Meeting on April 19, 2019, Town Electors adopted a resolution recommending that Cable’s Town Board be expanded to five members to broaden voter representation.

The proposed ordinance establishes a mechanism where two of four Supervisors would be elected in alternating years.  The cost of the action would be add about about $6,000 per position to the Town of Cable’s Annual Budget.